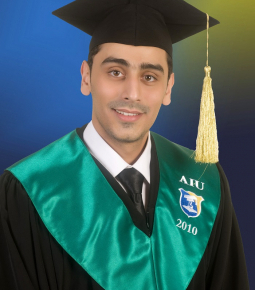 I studied pharmacy at the Arab International University between 2005 till 2010.I was among the first batch to graduate from the Arab International University. After graduation, I started working at Novartis Pharma Company, which is one of the top five pharmaceutical companies worldwide. After 3 years of working in the pharmaceutical industry, I felt that it was the time for me to continue my higher studies and I decided to pursue a master degree in Forensic Science. According to the international relations of the Arab International University, among the many acceptance letters I received from different universities, I was awarded the Erasmus Mundus program, a fully sponsored master program offered by the Educational, Audiovisual and Culture Executive Agency (EACEA) of the European Commission for two years (2013-2015). It was a great honor for me being among the 18 candidates who were selected from more than 130 applicants. The master program was offered by the University of Lincoln in United Kingdom in partnership with University of Cordoba, Spain and Instituto Superior de Ciencias de Saude Egas Moniz (ISCSEM), Portugal. This international program exposed me to different academic/professional environments in three different European countries and allowed me to learn a lot about different cultures and various academic systems. I graduated with a Distinction in my master degree and my master research project on “Determination of benzene, toluene and ethyl benzene in air samples using sorbent trap coupled to UV-IMS.” was published in a high impact factor scientific journal and has been selected as one of the most interesting publication in the University of Cordoba Spain for September 2016. I am also a proud member of the Royal Society of Chemistry in UK. I also participated in several international conferences and meetings such as the Second International Meeting in Forensic Sciences and Criminal Behavior in Portugal and Postgraduate Research Symposium organized by The Chartered Society of Forensic Sciences at the University of Leicester, UK.  During my master studies, I developed a great interest in drugs and blood toxicological analysis and that is why I am currently doing my Ph.D. degree on “Validation of IMS in the detection of Cannabis metabolites in human exhaled breath” at the Technical University of Dortmund, Germany.