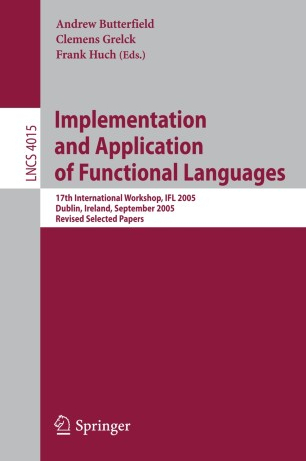 The 17th International Workshop on Implementation and Application of Functional Languages (IFL 2005) was held in Dublin, Ireland, September 19–21, 2005. It was organized by the Department of Computer Science at Trinity College, University of Dublin. IFL 2005 was the 17th event in the annual series of IFL workshops. The aim of the workshop series is to bring together researchers actively engaged in the implementation and application of functional and function-based programming languages. It provides an open forum for researchers who wish to present and discuss new ideas and concepts, work in progress, preliminary results, etc., related primarily, but not exclusively, to the implementation and application of functional languages. Topics of interest cover a wide range from theoretical aspects over language design and implementation towards applications and tool support.