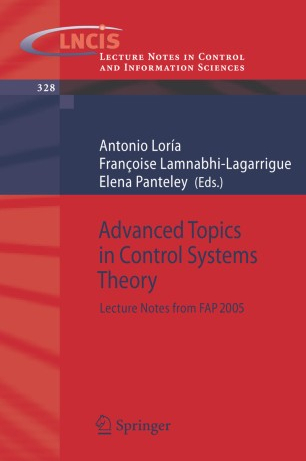 "Advanced Topics in Control Systems Theory" contains selected contributions written by lecturers at the third (annual) Formation d’Automatique de Paris (FAP) (Graduate Control School in Paris). Following on from the lecture notes from the second FAP (Volume 311 in the same series) it is addressed to graduate students and researchers in control theory with topics touching on a variety of areas of interest to the control community such as nonlinear optimal control, observer design, stability analysis and structural properties of linear systems. The reader is provided with a well-integrated synthesis of the latest thinking in these subjects without the need for an exhaustive literature review. The internationally known contributors to this volume represent many of the most reputable control centers in Europe.