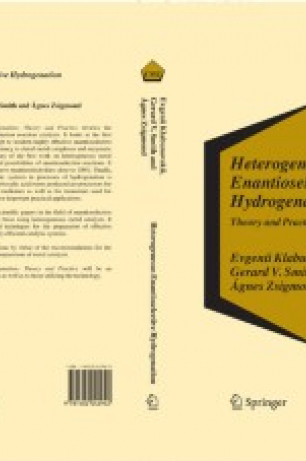 The book looks at the first relatively ineffective catalysts right through to modern highly effective enantioselective catalytic systems, comparable in their efficiency to chiral metal complexes and enzymatic systems. The book begins with a summary of the first work on heterogeneous metal catalysts, which showed only the principal possibilities of enantioselective reactions. The book then elaborates on metal catalysts which have enantioselectivities close to 100%. Finally, the book describes the practical utilization of chiral catalytic systems in processes of hydrogenation. The a - and b -hydroxy carboxylic acid esters produced are precursors for manufacturing many synthones used for medicines as well as for monomers used for biodegradable polyesters, both of which have important practical applications. The book summarizes more than 800 scientific papers in the field of enantioselective catalytic hydrogenation reactions, mainly those using heterogeneous metal catalysts. It provides detailed explanations of special techniques for the preparation of effective dissymmetric catalysts which provide highly efficient catalytic systems.