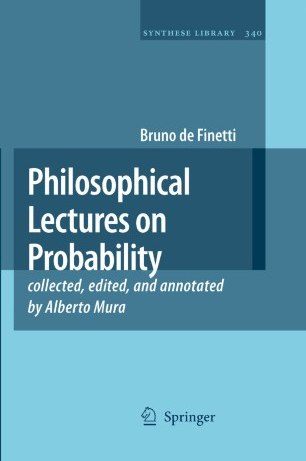 Philosophical Lectures on Probability contains the transcription of a series of lectures held by Bruno de Finetti (one of the fathers of subjective Bayesianism) and collected by the editor Alberto Mura at the Institute for Advanced Mathematics in Rome in 1979. The book offers a live in-context outlook on de Finetti’s later philosophy of probability. On several points de Finetti’s remarks revise widespread interpretations of his thought and reveal to be topical in the light of recent developments. The book is enriched by an essay of Maria Carla Galavotti, introducing de Finetti’s philosophy of probability as well as biographical essential information. Moreover, it contains more than 180 editor’s notes, aimed at helping the reader to properly appreciate de Finetti’s thought and its impact on recent philosophical developments about probability.