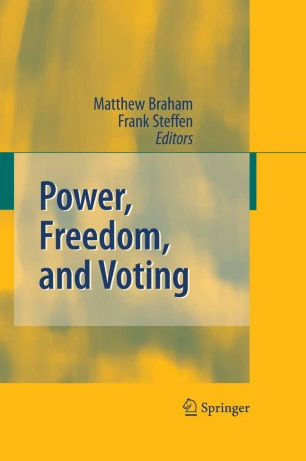 Power, Freedom, and Voting is an interdisciplinary book that presents a comprehensive insight into current research by economists, mathematicians, philosophers and political scientists on three intimately related concepts that are at the heart of theories of democracy and social welfare. The editors have brought together some of the leading scholars in the different fields to create a distinctive volume. Chapters include contributions on foundational and methodological issues in the definition and measurement of power and freedom and empirical studies of power and coalition formation in voting bodies. The volume also contains contributions that make an effort to bridge the gaps between different disciplinary approaches, including one on the importance of Machiavelli’s writing as a reference point for modern political theory, and others on the related concepts of fairness and responsibility. A majority of the chapters make use of game theory.