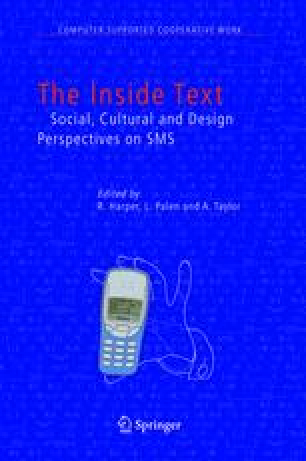 SMS or Text is one of the most popular forms of messaging. Yet, despite its immense popularity, SMS has remained unexamined by science. Not only that, but the commercial organisations, who have been forced to offer SMS by a demanding public, have had very little idea why it has been successful. Indeed, they have, until very recently, planned to replace SMS with other messaging services such as MMS. This book is the first to bring together scientific studies into the values that ‘texting’ provides, examining both cultural variation in countries as different as the Philippines and Germany, as well as the differences between SMS and other communications channels like Instant Messaging and the traditional letter. It presents usability and design research which explores how SMS will evolve and what is likely to be the pattern of person-to-person messaging in the future. In short, The Inside Text is a fundamental resource for anyone interested in mobile communications at the start of the 21st Century.