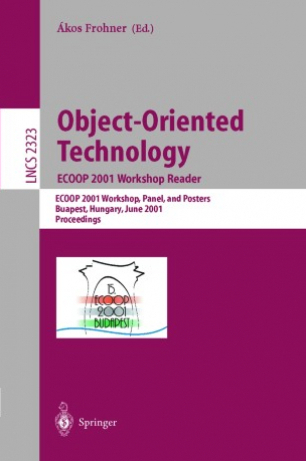 For the ?fth time in its history, in cooperation with Springer-Verlag, the European C- ference on Object-Oriented Programming (ECOOP) conference series is glad to offer the object-oriented research community the ECOOP 2001 Workshop Reader, a c- pendium of workshop reports, panel transcripts, and poster abstracts pertaining to the ECOOP 2001 conference, held in Budapest from 18 to 22 June, 2001. ECOOP 2001 hosted 19 high-quality workshops covering a large spectrum of - search topics. The workshops attracted 460 participants on the ?rst two days of the conference. Originally 22 workshops were chosen from 26 proposals by a workshop selection committee, following a peer review process. Due to the overlaps in the areas of interest and the suggestions made by the committee six of the groups decided to merge their topicsintothreeworkshops.