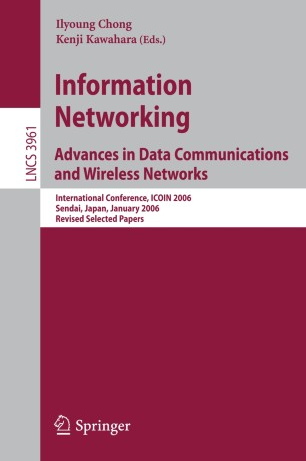 This volume, LNCS 3961, contains the papers selected from those presented at the International Conference on Information Networking 2006 (ICOIN 2006), held in Sendai, Japan. ICOIN 2006 constituted the 20th Anniversary of ICOIN. This year's conference program mainly focused on the field of ubiquitous and overlay networks, and on technology for ad hoc and sensor networks, mobile networks, transport networks, QoS and resource management, network security, peer-to-peer and overlay networks, resource management, and their applications. In response to the call for papers, 468 papers were submitted by authors from 23 different countries from Europe, the Middle East, and the Americas. Each paper was evaluated by two or three internationally known experts to assure the excellence of the papers presented at ICOIN 2006. To keep within the conference topics, some excellent papers had to be rejected to our regret. After extensive reviews, 141 papers were chosen for presentation in 25 technical sessions. Furthermore, another review of these papers was performed during presentation, and finally 98 papers were selected for printing in LNCS 3961. We expect this will add to the excellence of ICOIN 2006. The papers in LNCS 3961 are categorized into 8 sections: Mobile and Ubiquitous Networking, Ad Hoc and Sensor Networks, Advanced Networking, QoS and Resource Management, Network and Transport Protocols, Network Security, Applications and Services, and Peer-to-Peer and Overlay Networks, ranging from information networking to applications in next generation networks.