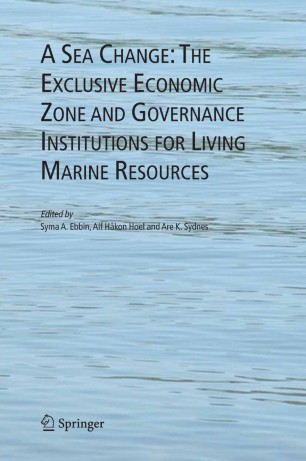 A Sea Change in a Changing Sea The oceans, seas and coastal areas encompass over 70% of the earth’s surface. They are a critical driver of the earth’s hydrologic cycle and climate system, important for c- merce, transport, and tourism, a source of economically important living marine resources, minerals such as hydrocarbons, as well as new pharmaceutical compounds. The marine environment provides essential habitats for thousands of marine living 1 2 resources, which in turn contribute significantly to global food security, employment, 3 and trade. Overall, the sea’s contribution to human welfare, in terms of market and non-market resources and environmental services, has been estimated at US$21 trillion/year (Costanza, 2000). However, despite the importance of the ocean realm to humans, there is a growing sense that human impacts are destabilizing this system. Some experts believe that current fishing levels are approaching or exceeding the total 4 productivity of the ocean ecosystem (National Research Council, 1999).