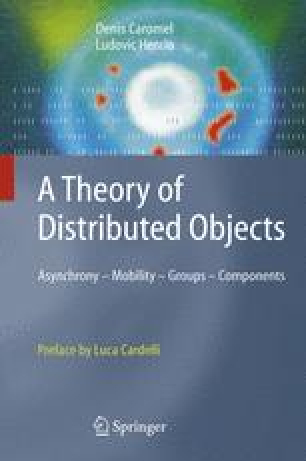 A Theory of Distributed Objects

Distributed and communicating objects are becoming ubiquitous. In global, Grid and Peer-to-Peer computing environments, extensive use is made of objects interacting through method calls. So far, no general formalism has been proposed for the foundation of such systems. Caromel and Henrio are the first to define a calculus for distributed objects interacting using asynchronous method calls with generalized futures, i.e., wait-by-necessity -- a must in large-scale systems, providing both high structuring and low coupling, and thus scalability. The authors provide very generic results on expressiveness and determinism, and the potential of their approach is further demonstrated by its capacity to cope with advanced issues such as mobility, groups, and components.