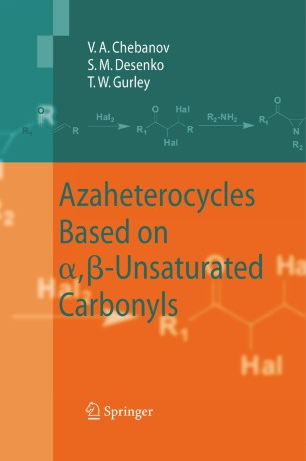 This book is devoted to heterocyclizations of aliphatic and aromatic, -unsaturated carbonyls with various binucleophiles leading to three-, five-, six and seven-membered partially hydrogenated nitrogen-containing heterocycles. During the last decade interest in these classes of organic c- pounds has been experiencing a scientific renaissance owing to their significant role in biological processes in living cells and diverse effects on physiological activities. In addition, such compounds are also more prevalent from the vi- point of ''classical'' problems of organic chemistry, among them reactivity, chemo- and regioselectivity, tautomerism, conformational analysis and features of their electronic structure. The character of these problems in the case of partially hydrogenated heterocycles differs sufficiently from that for hetero- omatized and perhydrogenated heterocyclic compounds and investigations in this field very often lead to interesting and unusual results. Extensively characterized cyclocondensations of, -unsaturated carbonyls, their synthetic equivalents and their precursors are the most widespread, facile and generally valid pathway to dihydroazaheterocycles.